The Lifelong Effort Of Trying To Find Your Own Style

When you look up a dictionary definition of the word ‘fashion’ it says “a popular or latest style of clothing, hair, decoration, or behaviour.” Whereas it defines the word style as “a distinctive appearance, typically determined by the principles according to which something is created”.

For a cold, logical set of descriptions, which is what you would expect from a dictionary, these aren’t too shabby at all. My family have been in the ‘fashion’ industry for generations and yes it’s most definitely all about the latest this, the latest that – whether that be clothing, accessories or even celebrity endorsement. There is a constant churning of new designs for the new seasons, and that is further compounded by the recent addition of product designed especially cheaply for Black Friday and Cyber Monday deals.

We are overwhelmed with discounts, offers and voucher codes and all of it just whips us up into a buying frenzy of more, more, more, cheap, cheaper, cheapest. Through the relentless marketing machine of social media we are told what to buy, what to wear, what is cool, what is trendy, and who endorses it. Thrilling as that can be, what does it actually do for our own sense of style or even our own sense of self?

From my own experience ‘style’ feels so much more wholesome and enjoyable than ‘fashion’ ever could. Fashion is more rigid, it’s of it’s moment, it’s timely. Fashion is here one minute, gone the next. Style though is more freeing, it’s limitless, it’s open. Style calls to you to express yourself and to meld all your past and present influences together into something new and uniquely and quintessentially YOU. I remember as a 10 year old kid going to a party around the corner from my house. For some reason that day my mum had won the battle over my choice of clothes (yes I know dressed by mum even at 10 years old!). My mum walked me up to the party (super not cool) and I shuffled in with my neat little haircut, black corduroy pants, a white military style short sleeved shirt and some white M&S gymnastics pumps, feeling really awkward and insanely aware of how uncool I thought I was. The girls coyly lined the walls of the main party room and smiled. I looked awkwardly down at the floor. The other boys turned up shortly after on their bmx bikes (this was 1982 after all), they strutted in coolly dressed in skinny jeans, a variety of Stan Smith Adidas and Reebok trainers, and cool flick hairdos which were all the rage at that time. I wanted the ground to open up and swallow me there and then.

That feeling of ‘uncool’ stayed with me for a long time and it probably wasn’t until I was 16 that I truly began to explore what my own style was and how to express it, but even that has constantly shifted and changed as I refined it more and more over the years. To me it’s like a fine tuning. You try something out and for a while it feels kind of good but then a little further down the line something else captures your imagination and you try that out, although you may well retain some ‘thing’ from your original experiments and this goes on and on until over time you put piece by piece of the puzzle together. Left to right – Justin (our next door neighbor), Michael (Brother), Rik (Me) Circa 1981. The three of us run the business to this day.

For me that journey took some tragic twists and turns along the way. First of all there was the late 80’s ‘indie’ look as we gazed at our shoes whilst dancing to The Smiths, James and early R.E.M. This was closely followed by the scruffy, baggy attire of Madchester and the Happy Mondays, Stones Roses and the burgeoning, drug infused rave scene. Much of this though was me still following the fashion of that time.

When I started to study Art at Manchester Polytechnic I started to branch out and be more my own ‘thang’. I discovered weed and The Beatles, grew my hair long and never looked back. The long haired hippy 60’s look morphed into a bit of a dreadful retro 70’s look inspired by The Doors and Pink Floyd, and then this strangely and rather contradictory morphed into a much blander and more mature look as I began working ‘professionally’ in the Media industry and settled into a ‘comfy’ relationship.

I felt this staleness in who I was becoming and how I was expressing myself but didn’t do much about it until a close friend invited me to join his band and asked me where the ‘peacock’ he knew me to be had gone to. From that point onwards I vowed to myself to always express myself outwardly more and more. I became the long-ish haired bass player in a band, experimenting traumatically with facial hair and I took the ‘I’m in a band’ look as seriously and as far as I could get away with. The domestic bliss of marriage and children that followed gave me the unflattering mid- life crisis look of being a stone or two heavier than normal and clinging desperately on to my long hair. Things had to change again.

The hair got shorter and shorter and my clothes became ironically more like my childhood again (it turns out I wasn’t that uncool as a kid after all!!). Classic trainers and boots, wearing raw denim in until the knees give way, timeless but good quality sweatshirts and shirts and of course the Manchester must-have – a wardrobe full of quality coats. (I do also have an unhealthy obsession with hats.) 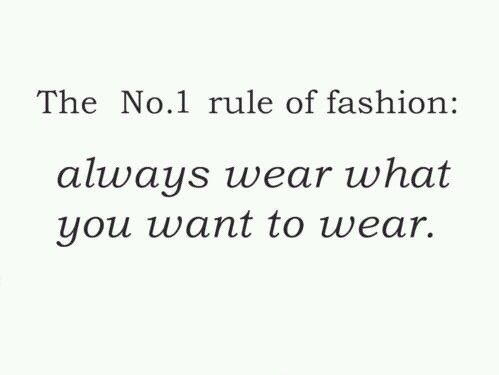 Now that I have honed and refined my ‘style’ I don’t notice ‘fashion’ anymore. I do what feels right for me and I’ve never felt more comfortable in clothes and indeed in my own skin. My wardrobe only has things I like in it. I could get dressed in the dark and most likely be happy with what I came up with. Of course i’m totally open to change and further tweaking but I know this would come from a core essence that is ‘me’ and not from a need to follow or to be accepted.

My advice would be to start somewhere small to begin with, don’t go for a radical overhaul. Perhaps begin with some interesting socks under a work suit or a brightly coloured hat, some trainers that you love which would ordinarily be a bit outside of your comfort zone, or even just a garish rucksack. Take small steps but make a commitment every day to be brave and to be true to yourself. You will make mistakes for sure but if you see it all as a journey of discovery then nothing is really a mistake – it was just a step along the path. Your confidence will grow and grow and then you become a self-fulfilling prophecy of inner confidence and outer style and the two begin to eventually perpetuate one another.

The essence is BE YOU.